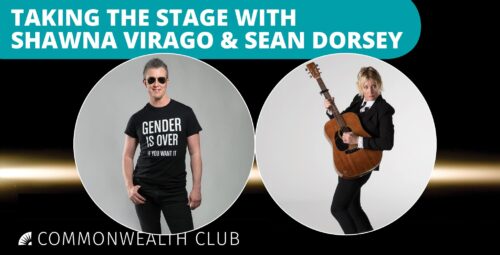 Join us for a conversation with local trans artist-activist couple—Shawna Virago and Sean Dorsey—about their lives as longtime transgender activists and performing artists.

Shawna Virago is a singer and songwriter known for her striking lyric-based songs. Her music twists together folk, punk and trans-americana, offering raw observations about survival in a predatory world, queer love, sticking up for the underdog, and gender rebels. Virago has performed as an out transwoman since the early 1990’s; she was one of the country’s first openly transgender women to perform and tour nationally. Virago is also the artistic director of the San Francisco Transgender Film Festival, taking place this year November 7–10 at San Francisco’s Roxie Theater.

Sean Dorsey is the founder and Artistic Director of Fresh Meat Productions and the Artistic Director Sean Dorsey Dance — which is celebrating its 15th anniversary this year! Dorsey is celebrated as the nation’s first critically acclaimed transgender choreographer in modern dance; he has toured 30 cities domestically and abroad. He has been awarded five Isadora Duncan Dance Awards and the Goldie Award for Performance, and this month became the first-ever transgender person on the cover of Dance Magazine.