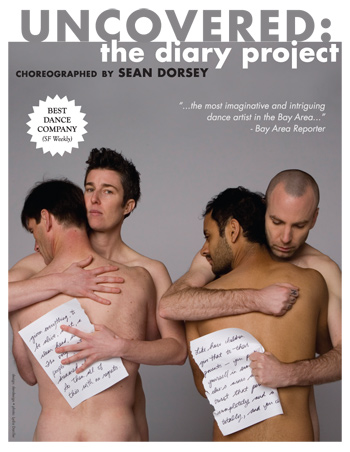 This powerful, highly praised concert is the culmination of a year-and-a-half long research process in which Dorsey uncovered and researched diaries of transgender and queer people – from the famous to the unknown. ‘Uncovered’ features ‘Lou’, a suite of dances based on the lifelong journals of Lou Sullivan (1951-1991), a Bay Area transsexual gay man and pioneering activist; and Lost/Found, the story of an imaginary boyhood based on a very real diary. ‘Uncovered’ offers an evening of full-bodied, powerful dances honoring remarkable life stories.

‘Uncovered: The Diary Project’ is the subject of national attention including feature articles in the Time Out New York, Out Magazine, the San Francisco Chronicle, In Dance, Curve Magazine, the SF Weekly, SF Appeal and on TV’s Culture Wire. Watch video of the show. 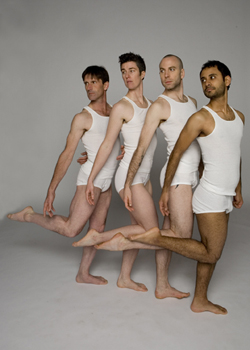 To create ‘Lou’, Dorsey researched the lifelong journals of Lou Sullivan (1951-1991), a transsexual gay man who lived and died in San Francisco and was a trailblazing activist, organizer and writer. Sullivan broke down countless barriers for transpeople and was literally a friend to hundreds and inspiration to thousands. Before his death, Sullivan bequeathed 30 years of his journals, letters and papers to the GLBT Historical Society in order to leave a companion for other transsexual and transgender people, to educate and open minds, and to ensure that the progress he had struggled a lifetime for would not be lost. To create ‘Lou’, Dorsey researched this collection, compiled and distilled 30 years of Sullivan’s journal writings into an original soundscore, and choreographed a suite of dances based on Sullivan’s remarkable journey.

“I’m an elder of the transgender community, and Sean Dorsey is my pride and joy. His sensitivity to the pain that comes with transformation is as compassionate as any Zen master’s. His deadpan comic timing, his skill at seduction, his charm and boyish sexiness all make us – his audience – love him all the more. Dorsey choreographs and performs…with a skill that rivals Mark Morris.”  – Kate Bornstein

Sean Dorsey is an award-winning choreographer and dancer and the founder and Artistic Director of Fresh Meat Productions. Recognized as the nation’s first out transgender choreographer, Dorsey’s acclaimed work is a powerful fusion of dance, storytelling and theater and is creating new space for transgender and queer bodies and stories in modern dance. Read more about Sean Dorsey at www.seandorseydance.com.