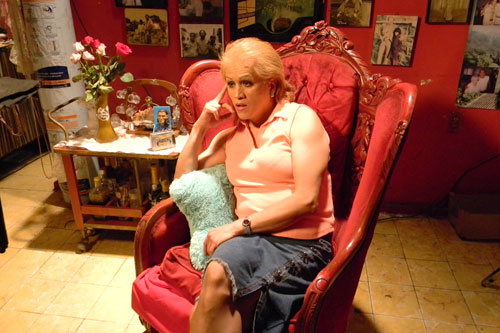 Fresh Meat Productions is proud to co-present this Frameline screening of DISRUPTED.
Coral Bonelli began life as “Pinolito,” a child actor in the rough-and-tumble film industry of 1970s Mexico. The son of a mariachi and an actress, he grew up poor but was not surprisingly, a natural performer—a passion his adoring stage mother, Lilia, soon steered into a winning movie career. After the movies gave way to the demanding cabaret circuit, “Pinolito”, announced he would henceforth be a woman—surgery and hormone treatments to follow. With ever-present and aging Lilia standing by, Coral copes with social prejudice and an already unforgiving show business environment. Today, pushing fifty and diabetic, Coral lives with Lilia in Mexico City, piecing together a living as a dance instructor, drag performer, and occasional sex worker while still pursuing the odd acting role.