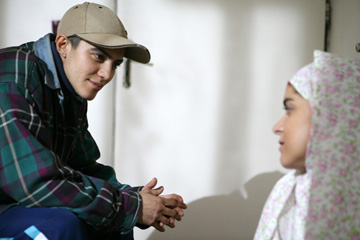 Iranian female director NegarAzarbayjani’s first feature is also the first Iranian narrative film with a transgender protagonist. Adineh, or “Eddie” as she calls herself, is waiting impatiently for her passport to be processed so that she can get female-to-male sex-reassignment surgery in Germany. The reason she won’t get an operation in Iran (where sex reassignment is surprisingly accessible despite the fundamentalist government’s policies against homosexuality) is that her wealthy and humiliated father is just as impatient to marry her off to a male cousin.   Having slipped from his clutches and needing to lay low while waiting for her passport, Eddie is on the verge of being assaulted by goons when Eddie flags down a passing car. It’s actually a clandestine taxi driven by Rana, a conservative young wife whose husband is in prison and can’t provide for the family. Although a woman driving a cab is taboo in her social class, she can’t resist when Eddie offers her triple fare to get her to her hideout. But when Eddie tries to explain that she’s “trans,” Rana panics and drives into the path of a bus. This remarkable film is anchored by a magnetic, heartbreaking performance by ShayestehIrani as Eddie, who also played the butchest of the forbidden female soccer fans in the banned director JafarPanahi’sOffside. What at first seems like an implausible friendship between Rana and Eddie achieves rare sympathy and solidarity through their mutual oppression, cutting through their class and ethical differences.