OF TRANSGENDER AND QUEER PERFORMANCE! 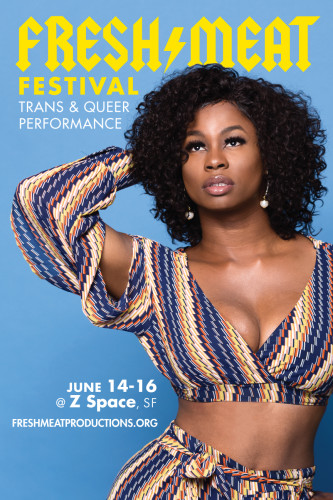 Times:
All shows at 8pm

read below for nightly lineup

Artistic Director Sean Dorsey curated this year’s special lineup and says, “The 2018 FRESH MEAT FESTIVAL is a loving declaration that trans and queer people of color, disabled queers, Black trans artists, elders, and gender-non-conforming artists are BRILLIANT and wise. These artists light the way through the mire of hatred and attacks on our communities, and show us the way to a glorious future where all of us can love and live as our full authentic selves.”

ACCESS NOTES:
Z Space is a wheelchair accessible theater. Seating is provided on floor level for people using wheelchairs & scooters, as well as anyone who cannot climb stairs (there are stairs starting at row 2 to the back of the theater). Tickets are general seating: accessible seating will always be made available upon request at the door — it’s also super helpful if you’d like to RSVP ahead of time to production@freshmeatproductions.org

Bathrooms are wheelchair accessible and will be welcoming to all genders.

Friday June 15 performance will be ASL interpreted by Pilar Marsh and Michael Velez; reserved ASL seating will be available. If you have questions or would like to request ASL reserved seating Friday June 15, please email: production@freshmeatproductions.org.