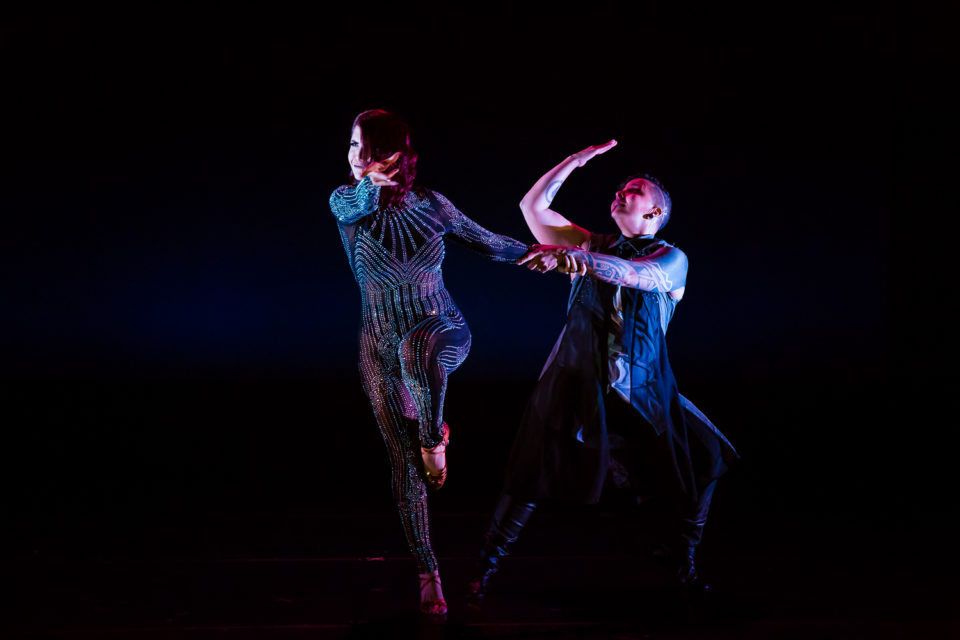 Choreographed and performed by: Jahaira Fajardo and Angelica Medina
Music by: Juan Bautista and Grupo Extra 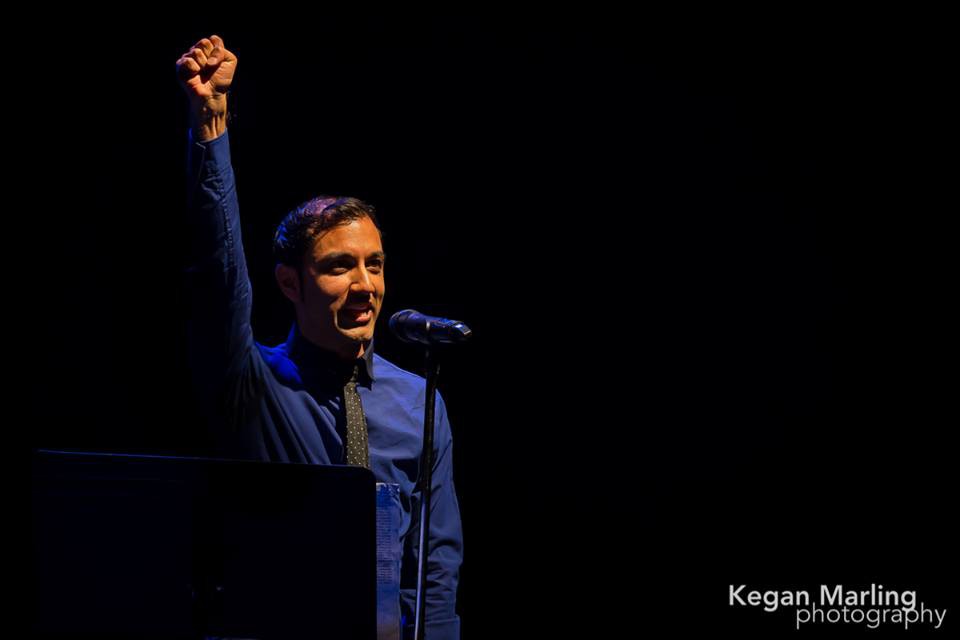 Written and performed by: Devi Peacock 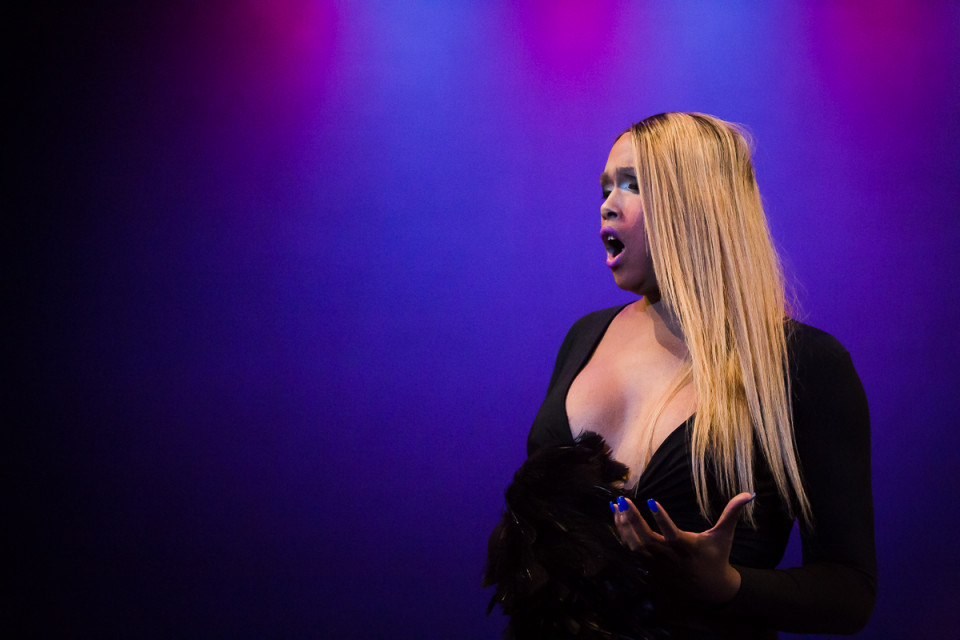 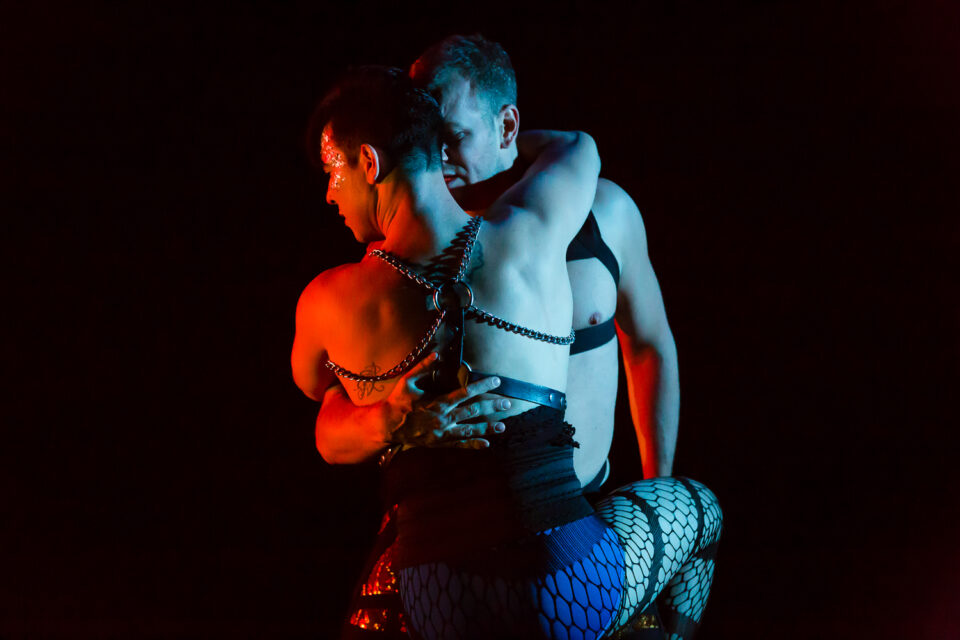 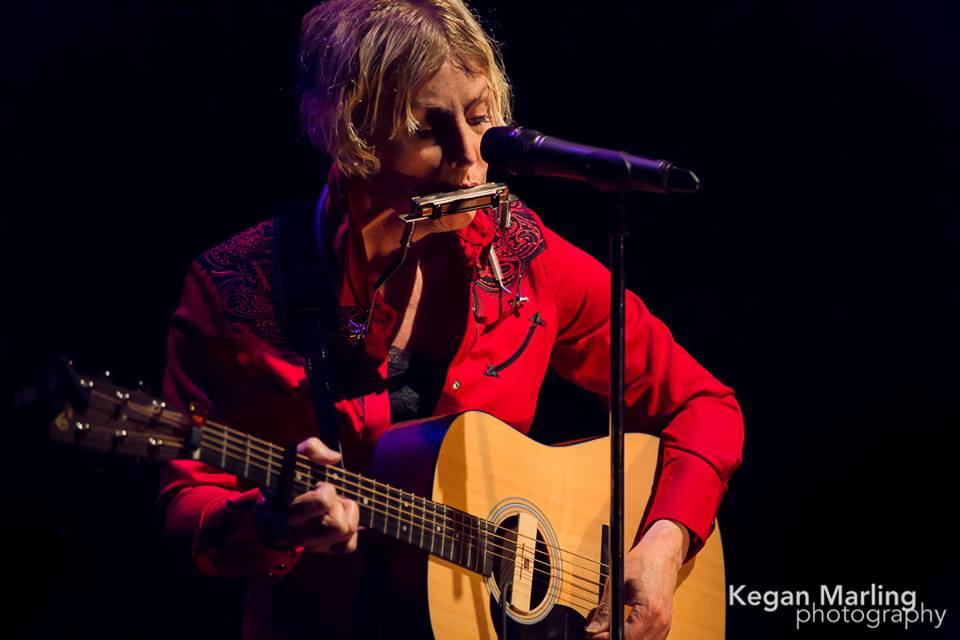 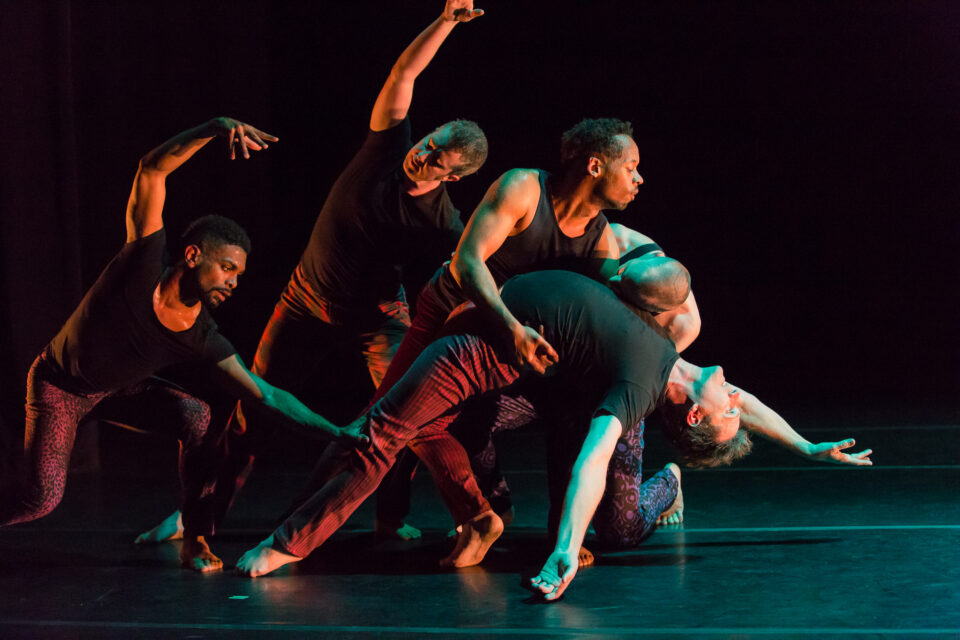 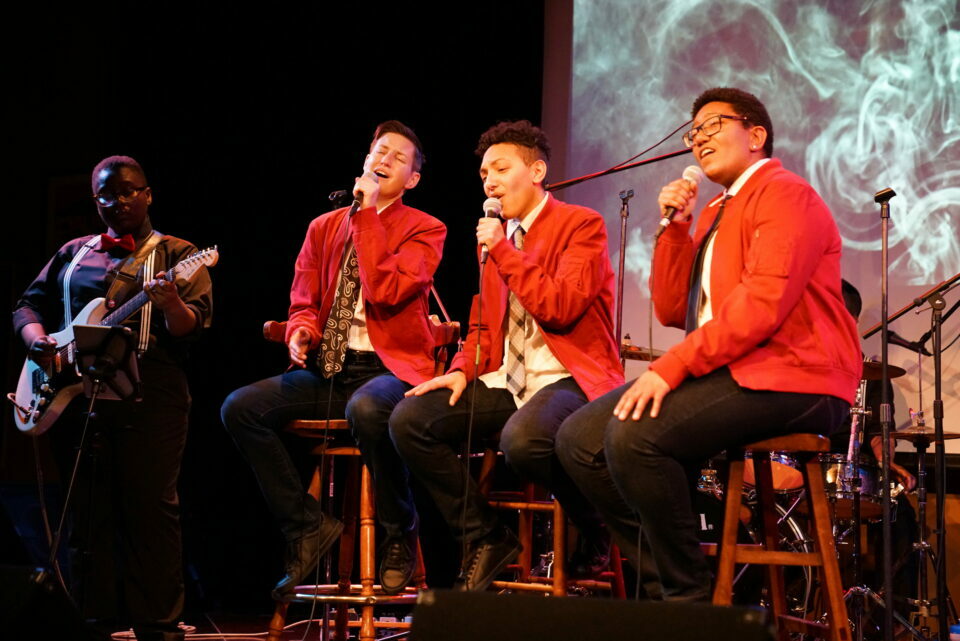 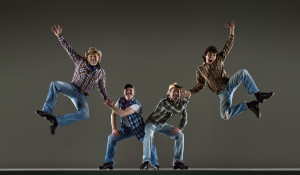 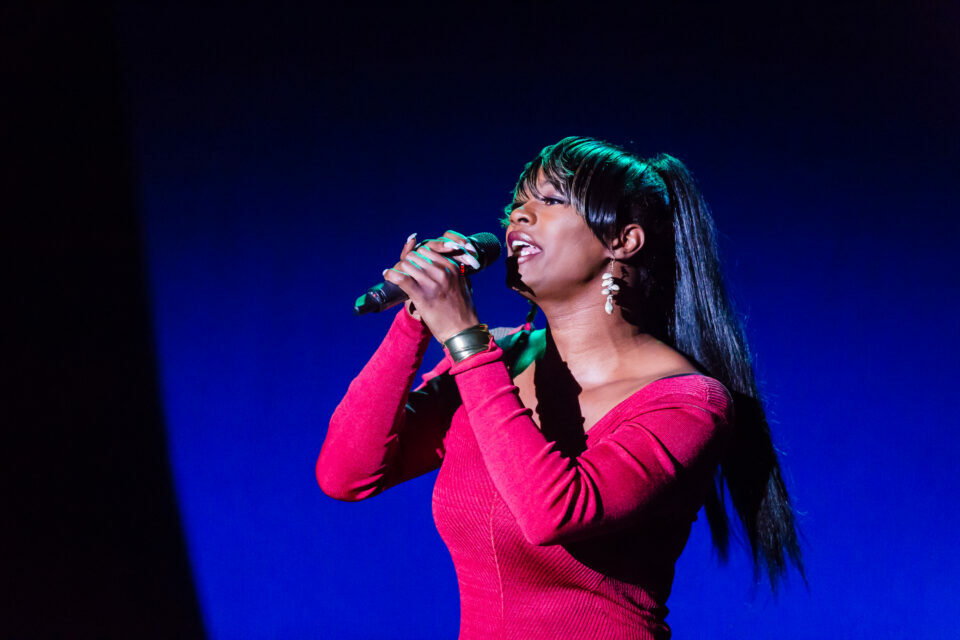 TAJAH J
This Is Love 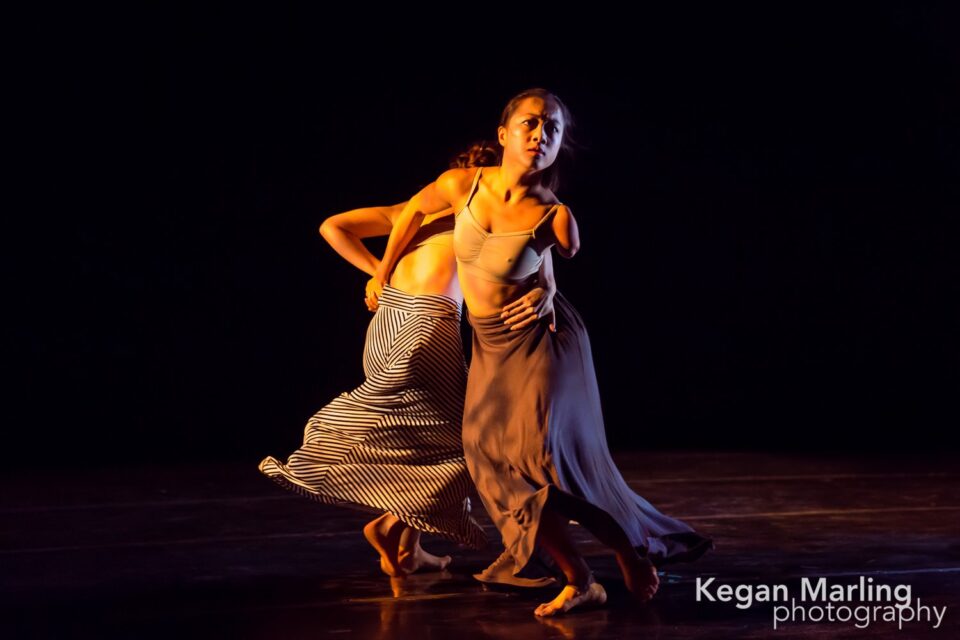 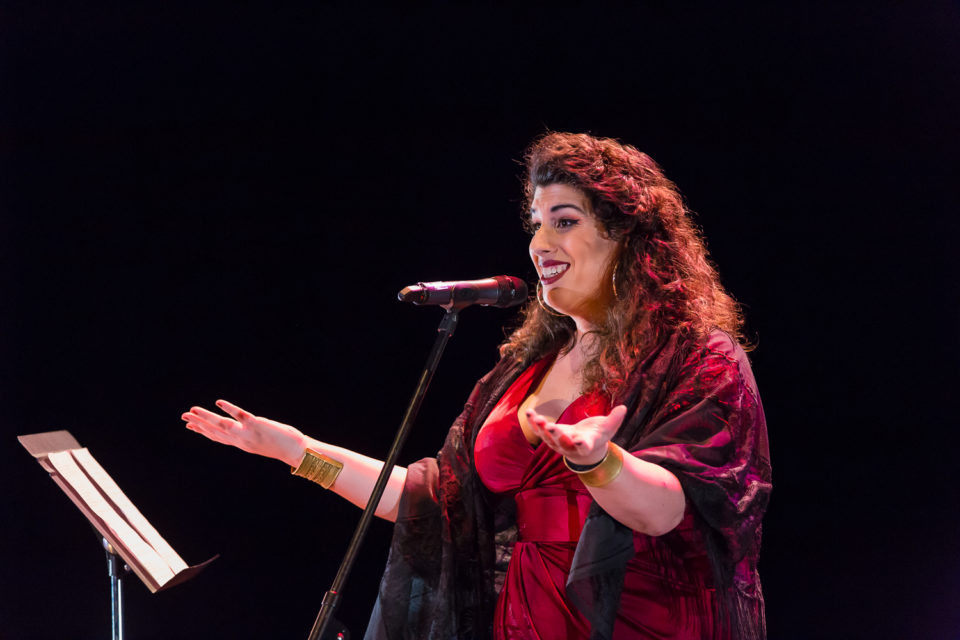 Written and performed by: Elena Rose 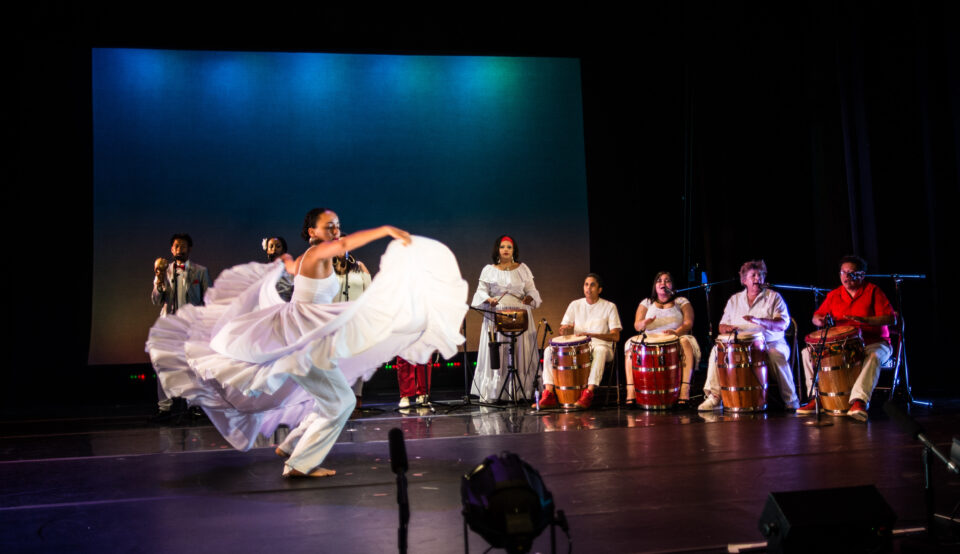 ANGELICA MEDINA DN JAHAIRA FAJARDO are the Directors of In Lak’ech Dance Academy, in Oakland CA. They both share an immense passion for dance, and in 2014 they met and fell in love on the dance floor. They soon after decided to grow as dance partners while training for competition. In December 2015 they placed 1st in the Latin Ladies Same Gender Division, at the World Latin Dance Cup. Jahaira made history as the first Bachata female leader to become a World Champion. In 2018, they returned to to WLDC as pros and placed first in the Bachata Couple Pro Cabaret division.

In 2018, In Lak’ech Dance Academy produced the first ever Queer Latin Dance Festival, where Queer and Trans Latinx dancers are highlighted and celebrated. This event continues on an annual basis.

DEVI PEACOCK – Devi grew up around the Klan and cracked jokes to survive. They still do. Devi’s the founding Artistic and Executive Director of Peacock Rebellion; a member of the QTPOC4SHO arts collective; an advisor to the Resilience Archives, and an activist cat mom. If you liked their set, please donate to TGI Justice Project: www.tgijp.org.

BREANNA SINCLAIRÉ is a graduate from Calarts and San Francisco Conservatory of Music (first Trans person in the Opera program). On the stage, she has performed in many operatic works: Carmen, Samson and Delilah, Durufle’s Requiem to name a few. She has sung with the SF, Washington DC and Los Angeles  Gay Men’s Chorus as their guest artist, recently she performed for the Americans for the Arts Annual Convention (alongside House Minority Leader Nancy Pelosi). She sang the national anthem for the SF GIANTS, OAKLAND A’s , and The San Francisco Deltas as the first trans singer to perform at a national sporting event. Breannawas named OUT Magazine’s LGBT Hero of the Year 2015.

She has traveled across the States and Canada. Her debut at the Walt Disney Concert Hall on July 2017 was a huge milestone in her operatic career. She performed at the Lincoln Theater, Nourse Theater and many celebrated halls.

December 31st, 2018, she made her debut with the San Francisco SYMPHONY as the first trans singer to perform with the orchestra.  https://www.facebook.com/breanna.sinclaire

ROBBIE TRISTAN AND ERNESTO PALMA are one of the most successful Same Sex Ballroom duos, have won numerous national and International titles, including The Gold Medal at the Gay Games (World Gay Olympics). Robbie originally from Hungary and Ernesto from Costa Rica, are both living in New York City and perform all over the United States. Together they are featured in the Award-Winning Documentary film, Hot to Trot. Available on iTunes and Amazon. For more information about them go to www.robbietristan.com and www.ernestopalma.com

Robbie & Ernesto are super happy to be part of this beautiful, eclectic, amazing and inspiring family of performers at FRESH MEAT FESTIVAL 2020 online.

SHAWNA VIRAGO is a songwriter celebrated for her lyric-based songs. She is one of the nation’s first openly transgender women to perform and tour nationally, and has performed as an out transwoman since the early 1990’s. She has been profiled online, in print and on radio including Bitch, the Advocate, Huffington Post Louder ThanWar, No Depression, Paste magazine, on NPR and PBS. POP DOSE Magazine wrote “In these turbulent times, you may often wonder, ‘Where’s our Bob Dylan? Where’s the bard of the 2010s translating the dicey political and social climate into musical stanzas?’… Enter Shawna Virago.” Virago is also a published writer and her work appears in several anthologies. She is also the Artistic Director of the San Francisco Transgender Film Festival. www.shawnavirago.com

Sean Dorsey Dance is currently working on a new project while sheltering in place: THE LOST ART OF DREAMING explores expansive futures and imagination. Sean Dorsey Dance has toured work 30 cities across the US and internationally. Dorsey has been awarded five Isadora Duncan Dance Awards and the Goldie Award for Performance. He is an inaugural Dance/USA Artist Fellow, and last Fall became the first openly transgender person on the cover of Dance Magazine.

THE SINGING BOIS –The Singing Bois is a queer/trans retro band that performs a blend of R&B, soul, rock, hip hop, and Latin genres. Their signature sound features catchy hooks, lush vocal harmonies, and an infectious groove to offer a soulful take on songs of love and liberation. The Singing Bois has performed around the U.S. at venues including Freight and Salvage, UtahPresents at University of Utah, UC Riverside, SF Pride Main Stage, UC Santa Cruz, Z Space, EastSide Arts Alliance, the Fresh Meat Festival, and the National Queer Arts Festival. The group released their debut self-titled EP in 2018.

THE BARBARY COAST CLOGGERS started in 1981 when a gay men’s square dance group decided they wanted to learn how to clog.  The group was the only all-male traditional clogging group for a while and has evolved over the years.  Thanks to Fresh Meat Productions, the Barbary Coast Cloggers began to push against traditions and gender expectations in our performances.  Today the organization is made up of men and women mostly from the LGBTQ community and perform as Mussel Rock in its co-ed incarnation.  Our mission is to continue to promote clogging and men dancing, and share America’s folk dance blended from the immigrant cultures during the country’s formation.

TAJAH J is a Contemporary R&B, Soul, EDM, and Pop artist. Born and raised in Detroit, Michigan and currently lives in the S.F Bay Area. As a black transgender multi-media artist and activist, Tajah J puts forth her experiences being formerly incarcerated, her love life, and her passion for trans empowerment as the essence of her music. www.tajahj.com/

AXIS DANCE COMPANY – Founded in 1987, AXIS Dance Company is the nation’s most acclaimed ensemble of disabled and non-disabled performers based in Oakland, CA. AXIS creates virtuosic productions that challenge perceptions and redefine dance and disability. Alongside our artistic programming, the Company provides unparalleled integrated dance education and outreach programs that remove barriers and showcase the beauty of difference. www.axisdance.org/​

ELENA ROSE – Sweet-talking trans mestiza monster queen Elena Rose rode stories out of rural Oregon and hasn’t stopped burning since. An internationally-recognized preacher, poet, and educator, she has performed with the Fresh Meat Festival, Writers Resist, Mangos With Chili, Queer Rebels, Brouhaha, the Speak! Radical Women of Color Media Collective, and Girl Talk: A Trans and Cis Women’s Dialogue, which she co-curated; co-edited the book Queer and Trans Artists of Color, Volume 2, with Nia Levy King; and organizes community care as Executive Director at Trans Lifeline. She lives in the East Bay, and can be found on Twitter at @burnlittlelight.

TALLER BOMBALELE ENSEMBLE was founded in Sept. 2014 by Julia Cepeda (granddaughter of Puerto Rican Bomba Patriarch Don Rafael Cepeda Atiles) and Denise Solis (founder/director of Las Bomberas de la Bahia). Taller Bombalele offers Bomba percussion, song, and dance classes and hosts Bombazos (Bomba performed informally in community) throughout the Bay Area. Currently Taller Bombalele classes are offered on Saturday afternoons at Rhythmix Cultural Works in Alameda, CA. Please visit their website for more information on our classes (www.rhythmix.org). The Taller Bombalele Ensemble is made up of students from our workshop, local Bomba practioners and musicians from the Bay Area, the ensemble is also directed by Denise Solis and Julia Cepeda.

Taller Bombalele strives to promote our Afro Puerto Rican roots music and dance tradition of Bomba, by teaching its history, dance, music, and songs through classes, lectures, workshops, and Bombazos to continue to preserve and expand this form of expression in community. Taller Bombalele is also proud to be part of a diverse community in the SF Bay Area and is therefore committed to teaching, learning, and collaboration and in reflection of this community, we welcome our community of different cultural experiences, gender expression or identities, and intergenerational participation. We strive to continually learn, grow and support each other in our learning by lifting up our music and dance tradition as a community that focuses on the collective and grounded by lifting up and leading through a women of color perspective.  https://www.tallerbombalele.com/